I started out with high hopes that Ethan would make his appearance on his own, but quickly realized that he loved his warm uterine home too much to leave it without some help. We scheduled the induction for Tuesday and got the call Monday evening around 8pm to come in the next morning at 5am to start the process.

I had already sent Michael out for Panera bagels to eat before we left, but they sadly told me over the phone that I couldn't eat or drink anything after midnight. So instead I ate breakfast at 11:30pm because I knew the next day would be a long one and I needed all the energy I could muster.

I showered and Michael got everything into the car and we were in bed by midnight. Around 1:30am I woke up to my stomach being hard as a rock on the right side. I tried several positions, but could never get comfortable. At first I thought maybe it was a contraction, but it never ended. I later found out that he had just balled up all on one side. It happened to be pretty chilly in our room that night so I blame it on the cold. I finally got back to sleep around 3:30 only to wake up at 4 to get ready to leave for the hospital. 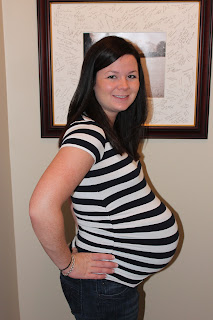 I was amazingly calm that morning. I think I had gotten all my nerves out the day before so I was pretty relaxed when we arrived. We filled out our paperwork, were shown to our room, I got in the lovely gown, and they started the pitocin and just like that things were underway. 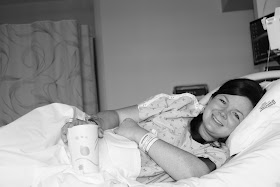 We had forewarned everyone that it was probably going to be a long day. When I arrived I was fully effaced but still only 1.5cm dilated with a pretty firm cervix. I asked my mom to come around 9 and told everyone else to take their time. No reason to hurry up and wait. My doctor came in around 10:30AM and broke my water and hooked up several apparatuses inside of me (who knew there were so many places to hook things to in there??) Let's just say it wasn't a fun process considering I was only at about 2cm and still felt like my cervix was in my throat. FYI for all expectant mothers out there...use the bathroom before they break your water. Walking over to the chair with the plastic bucket to pee with all kinds of liquids and wires coming out of you is really not fun.
The painful contractions began almost immediately. At this point my pitcion was up to an 11 out of 20 and they were coming about a minute apart and felt insanely long. I went unmedicated for about two hours during which all the family showed up and I could barely talk to them. The contractions along with an empty stomach made for a very nauseous situation and just as I threw up the nurse thankfully walked in to tell me the anesthesiologist was on her way.
The epidural was not nearly as bad as I thought it was going to be, in fact the birth process as a whole was much less traumatizing than I had made it out to be in my head. I barely felt a prick and my back was numb and she went about her business in setting up the epidural. The only weird feeling was her putting the tube down my back. It seriously felt like a car jack or something. Not painful - just weird. A couple minutes later - I was all back to smiles. 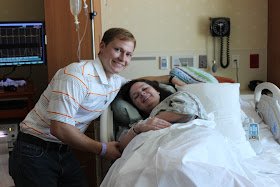 Around 2PM I was checked again and at a 4...still going slow. The next check was at 5 and I was at 9cm and about ready for action. They came back 30 minutes later and I was fully dilated and ready to push. The doctor informed me that his head was still not as far down as he liked but was willing to let me push and see where that would go. 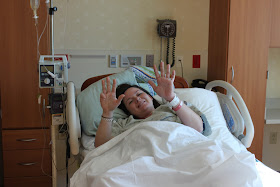 An hour later, as I was starting to give up hope the nurse informed me that she could see his head. I even let Michael look after swearing I wanted him to not see any of that. At that point though he'd seen enough gross stuff that I figured it didn't matter anymore. Thankfully he reported that Ethan had dark hair and I doubled my pushing efforts. Half an hour later though my doctor had a coming to Jesus talk with me. It just wasn't happening. The only thing coming down was the swelling of his head and he was afraid if I pushed much longer that I would just get him more stuck in my pelvis and make him difficult to get out even via C-Section. 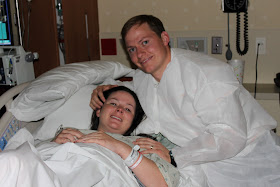 I cried of course. The last thing I wanted was a C-Section, but I knew he was right and I was just thankful that he let me try it my way. He informed me that I could still have the 4 children I wanted and that he would even make the cuts to where I could try a vaginal birth the next time if the stars aligned. His information calmed my worries somewhat, but I was full of nerves again and shaking like nobodies business. At 7:03 they wheeled me into the OR and I quickly asked the anesthesiologist for some nausea medicine and just like that the shaking and nervous stomach came to a halt. 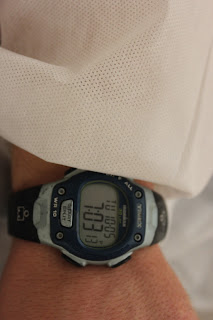 I didn't feel a thing during the delivery. A lot of people say they feel pressure, but all I felt was a weight lifted off when they delivered Ethan at 7:20. I heard his screams and felt relieved. They cleaned him up and finally brought him over for me to see him. 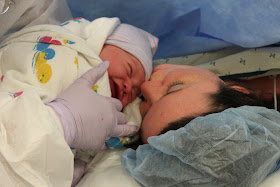 It was an amazing feeling but I really just wanted to get my hands on him and couldn't. I told Michael I was fine and to go with Ethan so he could capture every moment. I felt like I missed out on some of the excitement while they were sewing me up. Michael reported that he pooped 3 times and peed all over the nurses. 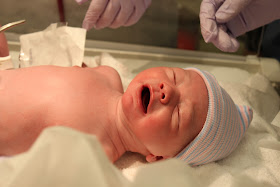 I was finally wheeled back into my room where I deliriously talked to my parents and sadly found out that I couldn't eat anything until the next day. I had been dreaming of Carrabbas through the whole birth! Thankfully I talked the nurse into some chicken broth and that had to tide me over till 11AM the next morning.
I finally got to hold my baby at 10:30PM. The nurse came in with him and was talking to him and loving on him while she was trying to explain how to breastfeed. I had the urge to scream "GIVE ME MY BABY!". All was well though and she was a really sweet person so I'm glad I controlled myself. He was perfect in every way and even though I knew nothing about him, I did love him at first sight. 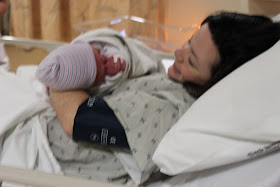 He latched on perfectly and breastfeeding was suddenly not as weird as I thought it was going to be. In fact it was pretty natural. I do contribute a lot of that feeling to the fact that Ethan had no problems getting latched on and doing what he was supposed to do. And just like that I was a mom. 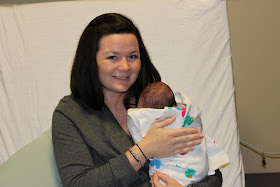 Please take a second and hit the "Like" button...

Comments make my day! Go ahead...get to typing. I want to hear from you.